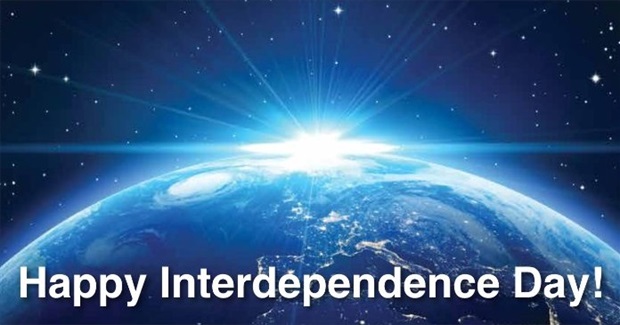 Today we celebrate the birth of our nation and the assertion of the colonies independence from England. Certainly this is an occasion worth celebrating since it gave birth to a great experiment of democratic governance. Currently, the ideals of this grand experiment are being assailed and we can hopefully recognize the fragility of what we have too long taken for granted.

This morning, I was sitting with the New York City Sangha (Chogye International Zen Center) via the miracle of Zoom. Many individuals from across the globe were also participating in the morning service. The realization arose that truly “The Whole World Is a Single Flower”. This is a term that was coined by Zen Master Man Gong, the grandmaster of Zen Master Seung Sahn, the founder of the Kwan Um School of Zen, an International organization to promote the Korean lineage of Zen Buddhism. The Whole World is a Single Flower denotes equality, peace and harmony. This was Zen Master Man Gong’s utmost aspiration – “that all human beings return to this common root, our original substance, and from this root, a world as a single flower of equality, peace, and harmony will again appear.“

It is also an expression of a basic Buddhist principle that of Co-arising Inter-Dependence also referred to as Dependent Origination. A basic interpretation is “Everything arises in dependence upon multiple causes and conditions such that nothing exists as a singular independent entity.” The opposite of this is seen as “The Fundamental Ignorance”; the delusion that things and events possess some kind of intrinsic or independent existence.

This notion is seeing major support in the scientific realms including physics, mathematics (e.g., fractal geometry) the life sciences and neuroscience (e.g, the Holographic model of brain functioning). So the bottom line is nothing exists or can function in isolation. All things must ultimately be considered as existing within an infinite cosmic context with no one part having substance or meaning apart from all else. The famous Vietnamese Zen master Tich Nhat Han referred to this as “Inter-being.”

As a basic example our brain cannot exist without a beating heart, lungs that breath, a digestive system and all else. All the cells in our body support each other and depend on each other to exist. Our bodies, require clean air to breath, and clean water to drink food to consume. The rainforests produce oxygen, coral reefs create the basis of the oceanic food chain. The earth depends on the sun which in turn cannot function without the galaxy and so on. As another example, as a result on our consumption of meat and close interaction with animal raised for food production, a bat poops in an open meat market in China, and stock markets crash in New York. In Chaos math theory there is a famous saying; A butterfly farts in Beijing and it rains in Seattle.

Nothing is independent! Yet, there are currents of thought that on occasion that arise during human history that fails to recognize these core understanding and thus leading individuals and nations seeing other peoples as a threat or competitor. Thus, all manners of strife are likely to arise fueled by suspicion, hate, and prejudice. Ecosystems are threatened and the planet lies on the brink of ecological collapse. Unlike the indigenous peoples who understood inter-being, we have not been good stewards of our natural world. And so while we celebrate our independence, I ask all to contemplate The Whole World as a Single Flower.

We may not be able to change societies, but a society is a collection of individuals. Therefore it is up to each and every individual to determine if they are engaging in “correct action” and make whatever changes possible to better fall in line with the natural laws and to practice compassion for all beings. And for God’s sake, wear a damned mask…lol!!

Read more about this in Chapter 3: “Everything is Everything” in my new book, Bronx Dharma!