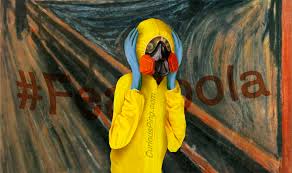 Halloween is a great time for us all to face our fears. I believe we are endowed with a genetic drive to do so, and perhaps that is what compels us to face the “demons” that haunt us :  https://blackturtlebooks.com/halloween-fear-exposure/

From time to time I endeavor to take the opportunity to apply principles of behavioral science and mindfulness to address some more molar and emerging issues. So right now, this country appears to be in the grip of  a pandemic of fear and panic in regards to the emerging threat of Ebola, and Isis. This panic, as with all reactive emotional responses is giving rise to a host of seemingly irrational behavioral reactions, spurred in part by histrionic news reporting and political gamesmanship. Politicians are calling for restricted air travel, closing borders. In some areas, school attendance is affected, business and trade are compromised, travel is impacted and so forth.

Franklin Roosevelt, as I previously pointed out on a similar post on terrorism, stated in an address to the nation, the day after the Japanese bombed pearl harbor, “Man’s greatest fear is fear itself”.   I believe that in so saying, he was exhorting the nation not to succumb to irrational fear but to marshal our collective resources in a  rational and cohesive manner.  The nation responded through massive mobilization of personal, private and governmental resources. In so doing we were able to overcome the greatest threat to international security that the world has ever faced.

Yes , watching beheadings in the middle east, and thousands dying in Africa from hemorrhagic fevers is very disconcerting and a very understandable source of concern.  But then so is the threat of diabetes, cancer, institutional poverty, coronary heart disease, gun violence and global warming.  Yet interestingly, such far more dangerous threats don’t appear to arouse nearly the degree of concern and emotional reactivity, even though in actuality they pose far greater risks to our nation, both in the near term and future.

Humorously,comedian and political satirist  Bill Maher stated, Isis didn’t have to behead two Americans to lure us into another war. “Really Isis, you had us at one”, he stated.

Our reactive fear obscures from our site the common issues that potentially give rise to both seemingly disparate threats: Poverty and environmental destruction!!!  Ebola emerged in sub-Saharan Africa in the jungles of Zaire and the Congo. This outbreak is the first time it has been seen in Western Africa.  Biologists have expressed that as man encroaches on and destroys the tropical forests, other deadly pathogens are likely to be released.  Keep in mind that other hemmorhagic fevers as well as HIV have originated from the very same locations. In a very real sense, we are the pathogens infecting the earth and these diseases are the earth’s immune system!  These diseases flourish in Africa because of the horrible poverty there, and therefore the lack of basic sanitation and any meaningful public health system.  And so we have to now come to the sobering recognition that the world is truly one and so what happens in a remote corner of the earth, now directly effects us. We can no ,longer afford to dwell in moral and economic isolationism.

Similarly, with the rise of Isis: Were is not for the poverty, lack of education, and corruption, some if which is to be blamed upon the history of western colonialism, our military adventurism and our insertion and support of often despotic rulers, all in our interest of maintaining our fossil fuel addiction, history in the middle east might very well have followed a different course.  Isis, as well as other fanatical military groups in the middle east gain their followers,  only in small part on the basis of ideology and religious principle.  More often, it is due to the failure of  regional governments to provide basic services, and the corruption and poverty that forces people to embrace any structure that  offers some measure of  oversight.  And of course the lack of education, especially among women, help to maintain the cycle of poverty that contributes to lack of progress. Of course it is dangerous to oversimplify such a complex history and situation.

However one thing is clear. Our reactive emotions of fear and rage serve little to address the problems. Bombing will not address the issue. It will only create new ones. Fear and panic regarding ebola, closing borders and eliminating air travel will similarly exacerbate the problem.

So how can we transcend these understandable flight or fight reactions in response to merging world events? Mindful exposure to the perceived threats might be very helpful in this regard.  Pay attention to the story your mind is weaving around such threats as ebola, or Isis or anything else.  Just sit and watch, without comment. If you find that you are getting carried away by thoughts and images, just continue to pull your attention back to the fear or whatever other emotions may be playing out.  Pay careful attention to the sensations and reactions within your body and pay note to where they are arising. You can also supplement this practice by purposefully “flooding” yourself with fear producing images. Push it to the max if you dare. Imagine a full fledged outbreak in your community and nation. Imagine helplessly watching as whole communities are infested with hemmorragic fever.  Eventually your loved ones contract the disease and waste away before your eyes. Of course you as well contract the disease and lose all your body fluids as your internal organs liquefy into a mass of gooey substance.! Repeat this exercise until you notice a decrease in your body’s arousal in response to these cues. This process is termed extinction or habituation in behavioral science. In Buddhism, this may be referred to as non-reactive mindful attention. Please see: https://blackturtlebooks.com/fear-exposure-implosion-therapy/

Our nervous systems are “hard-wired” to be maximally reactive to certain kinds of cues, even when those circumstances don’t actually represent a clear and present danger.  By the same token, we are relatively non-responsive to other factors that in fact should arouse higher levels of concern.: Please see previous posts… https://blackturtlebooks.com/risk-aversion/ , https://blackturtlebooks.com/threat-perception/ . As we learn to watch our fears and reactions with openness and objectivity, perhaps more measured and rational responses  might be entertained that previously would not enter our realm of perceived choices. So in the case of ebola we may need to :

1) Increase education of physicians and hospital staff in diagnosis, treatment safety protocols and so on.

2) Reverse budgetary restrictions to the CDC and NIH and increase funding for joint governmental –private research into formulating inoculations and treatments for similar viruses.

3) Consider means to address rampant poverty and deforestation in sub-Saharan Africa and other regions in the world.

4) Decrease percentage of GDP going to military and defense and increase funding for proactive world projects through such organizations as peace corps, red cross etc.

5) Increase public knowledge about the real and complex sources of destabilizing factors around the world that give rise to such phenomenon as terrorism and disease to help recognize that they are both symptoms of a underlying systemic and global condition.

My political views on this topic are really the critical issue here. What I do hope folks will consider, is that the tools and approaches of mindfulness and exposure can be used to help us to face whatever fears or other reactive emotions we might face such that we do not act out at an individual or international basis as a reaction to such charged emotional states.