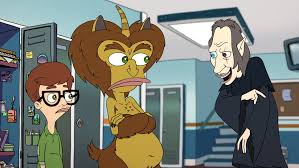 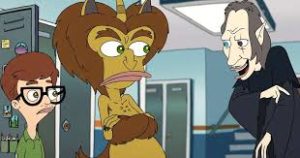 There appears to be a recent proliferation of brilliant adult themed cartoons (Rick and Marty, Bojack horseman and others) that boldly explore dark and taboo topics that other shows daren’t touch. Perhaps the animation art form allows a degree of unreality sufficient to allow the viewer enough comfort to peer into such issues. One such show is “Bigmouth”, a ridiculously comedic but often profound exploration of budding teenage sexuality, set in a largely Jewish suburb of New York, in Westchester county. This show boldly explores the deep sexual and moral confusion compounded by raging biological urgency that teens, and perhaps all of us experience. The main characters are accompanied by their personal “hormone monsters”, external manifestations of their inner drives and conflicts that none but themselves can observe. They are benevolent towards their charges though of course being pure Id, are often misguided in their interventions. 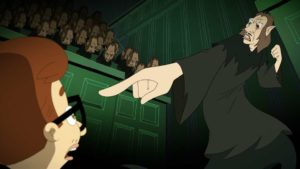 In season two, a less than benevolent entity emerges (brilliantly voiced over by David Thewlis who played Lupin in the Harry Potter films). The Shame Wizard first emerges as one of the main characters Andrew (John Mulaney) masturbates while viewing and sniffing his best friend’s sister’s bathing suit. At the the season finale, there is a slumber party at the school gymnasium. The shame monster has a field day, reminding each of their misdeeds, weaknesses and deep seated vulnerabilities. One character is “slut shamed” for allowing her boobs to be felt up. Another particularly nerdish character is exposed for her proclivity to dry hump her stuffed caterpillar. and so on. The episode deftly reveals the manner in which the act of hiding one’s self from each other on the basis of shame causes all manner of interpersonal conflict and misunderstanding. For it is a basic truth that when one is operating under the influence of shame, it is their inauthentic self that interacts with the world, creating a veritable shit-storm of bad outcomes.

Ultimately, the kids realize that each is being influenced by the shame wizard and so they boldly open up about their secrets and vulnerabilities, (which is, after all, the very antithesis of shame which compels us to hide) and in so doing taking away the shame wizard’s power, forcing his retreat. But here is where the show makes a mistake based on widely held notions. When freed from the shackles of shame, the kids in the gym, break wild to the extent that one kid climbs over a basketball net and hilariously takes a crap down through a basketball hoop. The idea being I suppose, that if it wasn’t for shame and guilt, our base animal instinct would go unchecked and we would all become savages. I believe that such beliefs may fall out of our shame-based religious indoctrinations that proliferate such notions.

However, it my contention, as I address in the book “Perfect Pain/Perfect Shame”, that guilt and shame are not necessary ingredients for living a moral life. It is empathy and compassion as well as a deeper understanding of how our actions influence the world around us that leads to “correct action” (a Buddhist term). When one is guided by true wisdom (prajna), one sees the co-arising dependence of all phenomena; that no thing exists by itself but is part of an unfolding interconnection with all other things and conditions. From this perspective then, to steal from another person would be tantamount to one’s right hand stealing from one’s left. It would just seem absurd to engage in such an action, not because of any rule or commandment, nor due any fear of punishment or damnation.

In fact, when one is freed from the shackles of shame, one is more likely to act out of a sense of compassion for others. We will be less subject to competitiveness, envy, or any need to prove our value or worth. Freed from shame, resulting from relentlessly honing mindful attention into the experience of shame, one can embrace their own strengths as well as weaknesses and liabilities without self-contempt or harsh judgement. We are what we are, perfect renditions of the universe…warts and all.

Despite this understandable oversight or misunderstanding by the creators of Big mouth, I am so glad that they chose to venture into the topic of shame, an oft overlooked emotion that so influences the development of young people, and continues to exert a pernicious influence over lifespan. If it takes a cartoon to open an awareness and discourse in this matter than so be it. I for one eagerly look forward to seeing future seasons. I sure hope we have not seen the last of the Shame Wizard!